Let's go back, it was easy 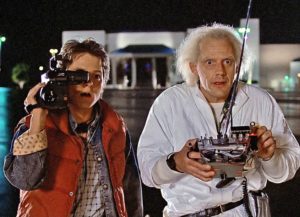 Today many companies force us to be hostage to their software, their choices but above all their ERRORS!!!
Time makes the formats with which you saved post-production projects, assembly, graphics had a minimum of backward compatibility, but today we are forced to use the latest version of the program otherwise it is impossible to read a file made even with a later version.

The problem arises from the fact that today more than 10 years ago the developers have become cows (Italian term, cows is a vulgarism drawn from the Florentine and mistakenly absurd Italian term thinking that it is less vulgar than the term cow) to be milked from one program to another, and therefore in addition to having the frustration of being moved from one program to another , to the difficulty of having to put their hand every 6 months to code not theirs and often not commented, they have become entangled and develop the software getting worse and worse.

I often hear programmers protesting my name, but they do not know how to respond in the face of the evidence of programs that produce more and more errors and problems by pouring on the end user the problem of exporting the finished work in decent conditions or fighting with all the bugs that make the program close while one works. 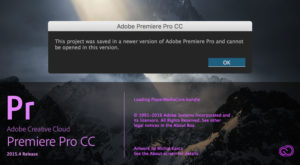 Many companies take back compatibility with the excuse that in older versions certain features are missing, I answer that if the old features worked in the new programs, I would have no reason to downgrade to complete my work…

However today we see an unoptiable way of downgrading projects, for two Adobe software : After Effects and Premiere

After effects fortunately plans to open also in 2018 to go on file / save with name
and presents both the 2014 and the cc version. It is not a case of the choice of these two formats, in fact with the 2014 Adobe has concluded the development of different addons and software for both Premiere and AfterEffects, has stopped multiprocessor and multicore development, so if you open After 2015 and see it slower, here's why…
The CC version also plans to save for CS6, so that it can be compatible with the projects carried out in the past and be able to collaborate with those who still decided to continue with a product that had achieved its production stability in both stability and speed.

Premiere is a program for editors, so obviously less complex than a compositing program, for this reason Adobe preferred to avoid this draw, it does not allow the saving for the old versions of the Premiere program…
There is a trick to restore compatibility, a trivial and simple trick, but few know it :

The premiere file is a compressed xml with Gzip, so you can edit it with a trivial text editor. By default a Premiere file is saved with the extension "prproj", but by renaming it "zip" you will be able to unpack and read the text file contained in it. Opening it with an xml or text editor that doesn't alter the format, from simple text edit of windows to the mac text editor, just change the final entry of version to the value 1 in the fourth line, from

this way at the opening premiere will think it is a file of the first premiere, will read everything it can interpret and discard the unknown entries, allowing us to open the file in each version of premiere windows and mac.

Important is to remit (without recompressing is unnecessary and if you do not use gzip will give error) the extension ".prproj".

A trivial information but not too much is that the cloud system plans to install the old versions of the packages, but not at the same time, which entails several inconveniences and almost infinite times, anosse of… you don't go back in time and use the old-school methods, which is the installer…

Adobe apparently doesn't make the installers of the various cloud packages available directly, but luckily there is a site where we have the ability to find the official links on the Adobe site to download different versions of the Programs of the Cloud suite.